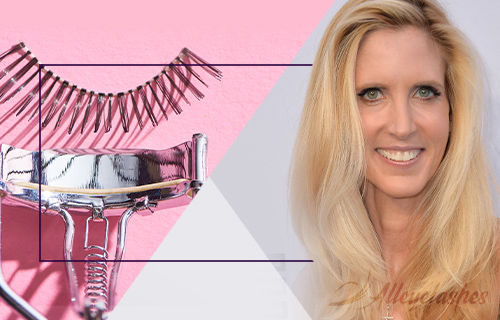 Ann Coulter is certainly a polarizing figure. She’s gone toe-to-toe with activists, pundits, and her take-no-prisoners political commentary endears her to some while others regard her as persona non grata. Either way you slice it, this blonde beauty has what it takes to get people talking. However, the biggest question on our minds isn’t what’s in her latest op-ed or when’s her next guest appearance.

We’ve been racking our brains to figure out if her eyelashes are real or fake. Her politics aside, Ann Coulter is always wonderfully coiffed and attired. This also goes for her lashes, which are not only voluminous but have great length. Though you won’t see her bat an eye in an interview, her gorgeous lashes are flawless. We’ve compiled a list of hints we think will lead us to the correct assertion. Read on to get a heads up on what we think about her stunning lashes. 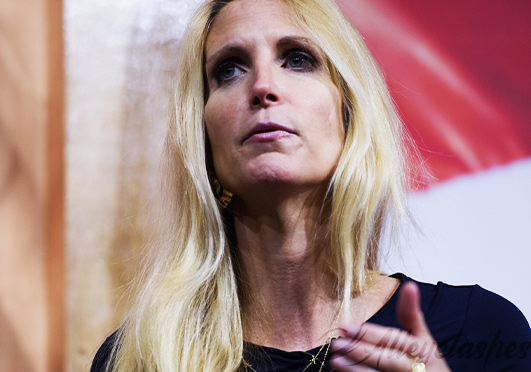 The evidence: A high school photo. 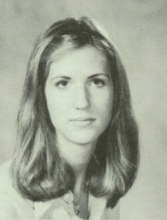 In an undated high school photo, Ann Coulter is sporting some seriously thick lashes. They look real as they are close to the lash line and blend in perfectly. Coulter has incredibly hooded eyes, a trait that makes it a little harder to discern if her lashes are real or not. However, in this high school photo, we can see that her lashes toward the end of her eye seem to naturally fill out. She also has lash lines that don’t start well before they should or after (the middle of the lid). Besides that, beauty experts agree that during the ’70s and ’80s, (Ann Coulter was in high school from about ’75 to ’79) fake eyelashes had tended to fall out of favor. The look during Coulter’s high school days would have been all about natural beauty. Makeup was light and breezy, and an emphasis was on lipstick and blush rather than lashes. There were exceptions to this rule, but as a teen growing up in the ’70s, we think that Coulter may have gone with the flow. Verdict: Real The Evidence: This photo from Time Magazine’s Top 100 Influencers (2010) 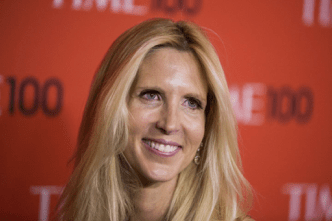 Ann Coulter has walked some of the country’s most distinguished red carpets, including this one for Time Magazine. Coulter stayed true to the aesthetic she picked up in high school and, though dressed to the nines, boasts a light, dewy makeup look. Her top lashes look full and voluminous, though unnaturally so. Her left eye looks a bit skewed, as if the eyelash strip may have been applied a bit incorrectly. The lashes themselves don’t look completely blended and are too dark for light blonde tresses. Also, her bottom lashes look a bit sparse. Lashes naturally become thinner with age and we think that Coulter may have boosted her lash look with false eyelashes on top. Verdict: Fake eyelashes 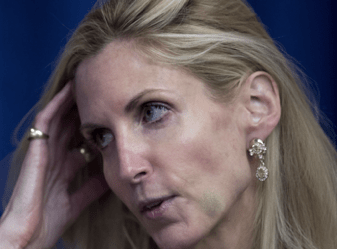 In this photo, we can see that Ann is au-naturel – except for her lashes. The top lashes look much fuller than the bottom lashes. However, an up-close look gives us a glimpse of her lash line, which doesn’t look to have a false strip. The curl at the top looks a bit exaggerated, suggesting that though she isn’t wearing falsies per se, she may be sporting lash extensions. Eyelash extensions are often more natural-looking than false eyelash strips and easily last six to eight weeks. The lashes on the other side really tell the tale. They look exceptionally long and thick, in contrast to her left side, which looks a bit more spotty, a sure sign that she may have had extensions put on. Verdict: Eyelash extensions Evidence: This undated photo 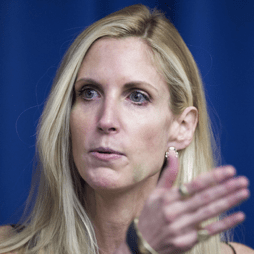 In this undated photo, Ann Coulter is makeup-free but is sporting gorgeous lashes. Her lashes have the tell-tale exaggerated curl. She doesn’t have anything on her lash line, though her bottom lashes look to be more filled in, possibly as a result of mascara. Verdict: Possible lash extensions Evidence: An updated, close-up photo 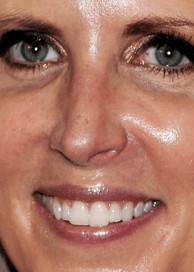 In this last photo, we can see that she’s wearing intensely lush false eyelashes. Her lash line is obscured, and it looks as if she has a black band across her lash line (a sign of a falsie). She is also wearing a dark liner above her eyes. This is often a sign that false eyelashes have been applied, as blending the adhesive often works better with a liner. She also has tremendous curl and her bottom lashes aren’t as sparse, a possible indication that she has an application of bottom cluster lash strips. Her lash line on top also only gets thicker toward the middle of the eye, a clear sign she’s wearing falsies. Verdict: False eyelashes

We feel that though Ann Coulter’s natural eyelashes are great, they aren’t always on display. Instead, we think that’s she has utilized false eyelashes on many occasions to achieve a cool, classic look with soft, natural-looking makeup. On other occasions, she may have gone without the false eyelash strips. Instead, she may have opted for the route of eyelash extensions, which are a wonderful option for those who don’t want the bother of applying a strip. Eyelash extension wearers can get also get a quick enhancement (most extension processes last no more than two hours) that lasts for weeks. It’s convenient, easy, and wearers don’t have to worry about pools or showers and are lash ready for any event. If you’d like to become adept at spotting lash extensions, look for sparseness amongst the lashes as well as unusual length or color. Eyelash extension wearers may also have an exaggerated curl pattern along their lashes. Keep in mind that eyelash extensions have a few choices as far as curl is concerned. Wearers can opt for a J-curl (curls that face downward) all the way across the spectrum to L-Lift (extreme upward curl). Not all curls will be the same for everyone. Signs of a false eyelash application can also include a thick black band along the lash line as well as very thick lashes.  Another thing to look out for is if the lash line begins well before you’d expect it to or well after. If the lashes are fluttering a bit more than they should, especially if there is a gentle breeze afoot, then it’s safe to assume the lashes are falsies. While it’s fun to speculate how someone may have gotten their lush lashes, remember that there’s no shame in wearing lash extension or false eyelashes. It is a great way to change up your look and can make you feel wonderfully confident in a matter of minutes. Although we’re pretty confident in answering whether Ann Coulter’s eyelashes are real or fake, we still think her beautiful lashes are a wonderful complement to her look on camera.

Israel from Ashburn just bought!
Velour Lashes
9 hours ago View Product
We use cookies to ensure that we give you the best experience on our website. If you continue to use this site we will assume that you are happy with it.Ok