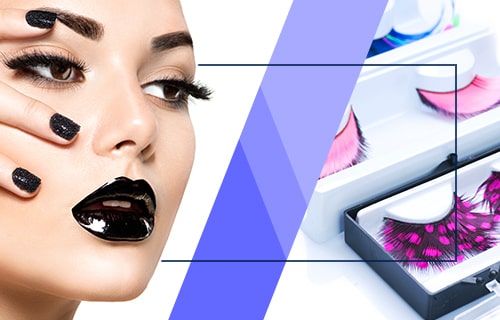 Riveting lashes haven’t always been de rigueur. In fact, fluttery lashes were a cause of raised eyebrows and scorn across the Middle Ages. During this time, the position of the church was that long lashes were wanton and invoked people to sin – an opinion that often caused women to pluck them out, leaving them susceptible to debris, dirt, and infection. Since our lashes actually serve a great purpose, it’s a good thing lashes made their triumphant comeback.

Women from all over have since been fascinated by the look of luscious, come-hither lashes. That fascination has caused them to do all sorts of things to recreate a sumptuous stare, including sewing hair from their heads onto their eyelids. One early 20th-century silver screen star, Seena Owens, underwent a process by which spirit gum was used to attach lashes. The director at the time, famed D.W. Griffith, had insisted. This ultimately caused a bad reaction the next day off the set. Her eyes were reportedly red and swollen. Luckily, in today’s modern age, we have a variety of (pain-free) options available to us.

False eyelashes are one method that can be used today to make lashes fuller and more dramatic. Although falsies aren’t a new invention, they have been certainly far improved upon from their predecessors. In the early 1900s, false lashes were made of natural, human hair and attached to a strip of silk or even gauze. The result was something similar to today’s false eyelashes, but not as reliable. The pieces came apart easily and didn’t always achieve the desired look. In fact, a writer even described how one woman looked “as if…[they] were recovering from a small explosion.”

Fashionistas in today’s world can avoid this scenario as false eyelashes have come a long way. Fake lashes grace the eyes of many different people across the globe and are a basic necessity on movie sets and on the small screen. Early lashes were made of a variety of materials, including horsehair. Although horsehair is still in use to some capacity, there are now three main materials that are currently used for false eyelashes.

What’s in a Lash?

Lashes are made up of keratin, a material the human body naturally produces. They are rooted in the eyelid and given nourishment through the follicle. The structure of the lash is close to that of the human hair from the head. Lashes are part water (about ten percent) and mainly proteins (ninety percent or so). Although lashes are considered a beauty enhancement, they serve a very important function. They house groups of lubricating ducts from sebaceous glands that bathe our eyes in tears. Lashes also mitigate dirt and other irritants from flying into the delicate structure of the eye. Lashes go through distinct phases. These phases include a growing phase (this occurs for about 45 days or so), a declination phase (the hair ceases to grow and this lasts about three weeks on average), and lastly the shedding phase, where the hair falls out. After the full set of phases, the process begins again and the hairs are regenerated. 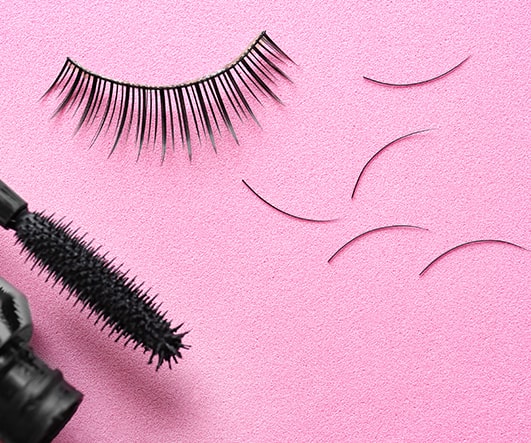 What Are False Lashes Made of?

There are typically three types of artificial lashes: Synthetic lashes, human hair lashes, and mink fur lashes. Synthetic lashes are made from man-made materials, including rubber, and other recyclable materials. These lashes are the cheapest to obtain but are often of lower quality. Due to their nature, they tend to be shiny, heavy and not prone to a nice, curled natural lash look. It is recommended that users procure these lashes for one time use as they can cause lasting damage to the eyes as well as increased droopiness of the lid. There are higher grade synthetic lashes available that look a bit more natural, but these are still inferior in comparison to other types of lashes. Another type of lash is the kind made from human hair. These are the best ones you can find, and they accurately mimic the look of your own lash. These lashes are more expensive than some others, including synthetic, but are comfortable, last longer and can blend in seamlessly with your own if applied correctly. Human hair lashes can often be used more than one time if stored properly in a cool, dry place. Mink fur lashes are unsurprisingly the most expensive lash you can buy. They are often made by hand and are composed of fur from the tails of the mink, an animal that is found in the wild. When this critter is captured for its fur, it can live in cramped, enclosed conditions. If you live a cruelty-free lifestyle and stay away from animal products, this would not be the lash for you. In recent years, mink fur lashes have been the subject of serious controversy, both within the beauty industry and outside it. However, those who swear by them state that they are comfortable, frame the eyes well, and give the appearance of natural-looking, feathery lashes. A few companies are dedicated to making sure their mink lashes are cruelty-free, so it is worth it to do a bit of research before purchasing. Some lashes are still made of horsehair. Horsehair lashes can be expensive as well, and due to their natural shape, they can also mimic the look of human hair eyelashes. These are still worn as many people prefer the feel, which can be softer and lighter than some other kinds of lashes, including mink fur. Horsehair is often a go-to for individuals who may want to rock a look that is dramatic but seek a cruelty-free option. The hairs are collected from a horse’s tail and therefore don’t cause any harm or pain to the horse. Horse lashes often go through an extensive ultraviolet process to render them sterile and free from microbes and contagious agents.

What Lashes Should I Get?

There is no right or wrong answer. Each individual must decide which lash is perfect for their particular situation depending on their unique and distinct needs. If you have animal allergies, it may be best to obtain lashes that are made from synthetic materials or human hair. If you are open to mink or horsehair, these may be the options for you. Your lash choice may also depend on the type of curl you desire, length, and fullness. Take your time when looking at your options and choose based on what will most likely give you the desired result.

We use cookies to ensure that we give you the best experience on our website. If you continue to use this site we will assume that you are happy with it.Ok